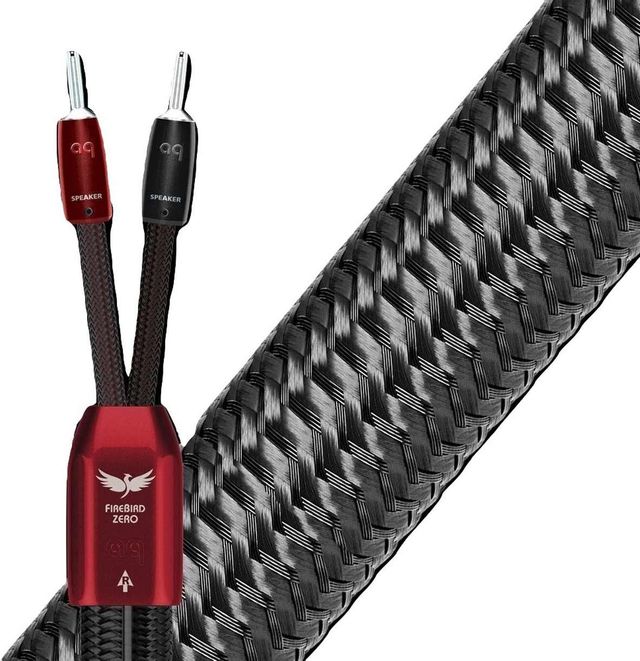 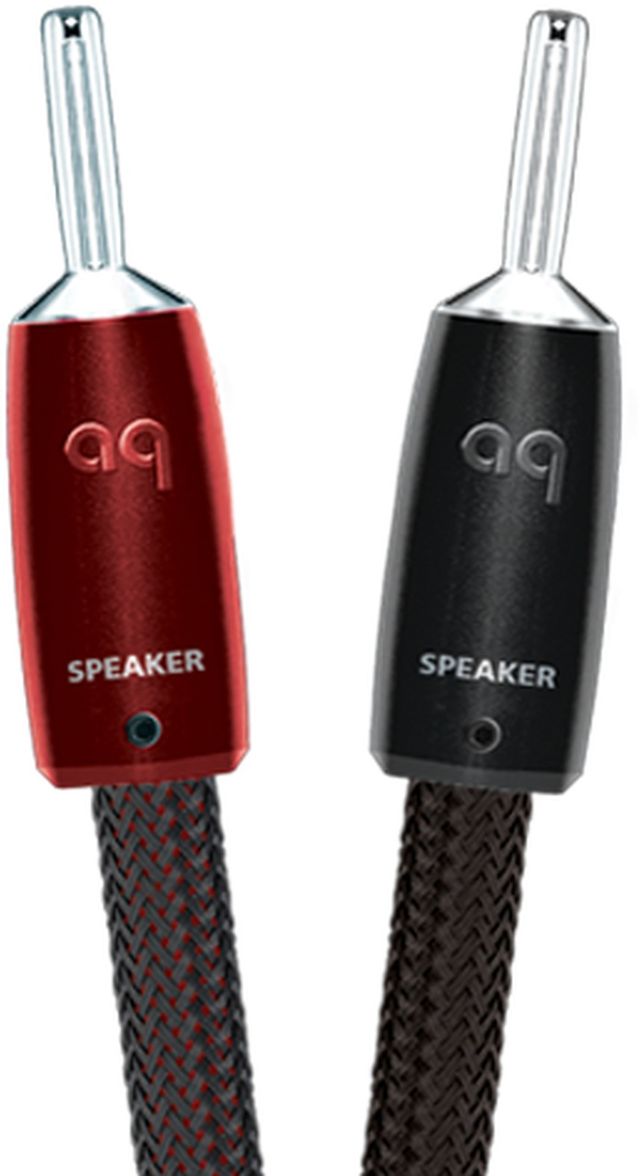 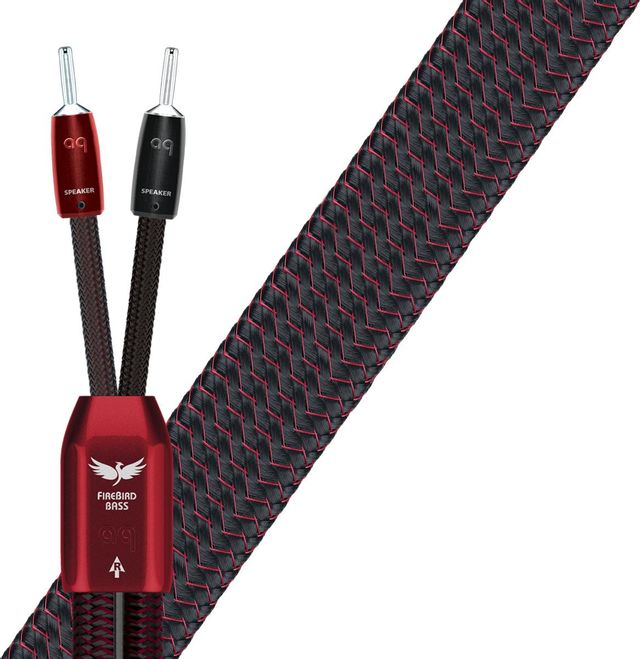 The same team responsible for the groundbreaking new series of AudioQuest AC power cables—AudioQuest's founder, William Low, and Director of Power Products, Garth Powell—has created what are simply the most transparent, get-out-of-the-way immersive speaker cables ever made.
Price Starting At
$41,600.00Save $NaN
$41,600.00

With the introduction of the Mythical Creatures series of speaker cables, AudioQuest has pushed significantly beyond even its own very high standards.

The same team responsible for the groundbreaking new series of AudioQuest AC power cables—AudioQuest's founder, William Low, and Director of Power Products, Garth Powell—has created what are simply the most transparent, get-out-of-the-way immersive speaker cables ever made. The Mythical Creatures series—ThunderBird, FireBird, and Dragon—are not merely an incremental evolution; their introduction represents a category advance in speaker cable design.

Building on a solid base of familiar AQ technologies, Garth and Bill specifically focused on addressing one of the most vexing issues plaguing speaker cable design: the mismatch between the amplifier’s source impedance and the speaker’s load impedance.

All previous attempts to address this issue chose to move the speaker cable’s characteristic impedance to a value closer to the nominal impedance of the speakers. All such attempts failed because a speaker’s impedance changes with frequency, and the amplifier’s output impedance is something else altogether.

By eliminating the Mythical Creatures speaker cable’s characteristic impedance, current compression and distortion of the signal (current) transient is significantly reduced. The result is dynamic contrast, transient response, and bass slam that are rendered seemingly without effort.

These new Mythical Creatures ZERO speaker cables may be used in one of two ways: either as ideal Full-Range cables, or, in combination with a dedicated BASS cable, in a BiWire cable assembly of unparalleled performance. ThunderBird, FireBird, and Dragon BASS cables incorporate our patented common-mode noise-rejection technology, yielding an audibly dramatic additional reason to BiWire when possible.

Whether AudioQuest’s new Mythical Creatures speaker cables are used as Full-Range or BiWire, the beautiful sonic result is the sound of your amplifier doing its job unmolested by either current compression or radio-frequency noise.

Note: Often, the choice between terminating your speaker cables with spade lugs or banana plugs will come down to personal preference. AudioQuest spades and bananas use the same base metal, the same superior plating, and no metal-to-metal junctions, resulting in parts of equal quality. However, the EU-compliant isolated binding posts used on some power amplifiers often makes it difficult if not impossible to tighten spade lugs with high torque or pressure. In these applications, the AudioQuest banana connector is the superior choice, and may be the only choice.

The only complete way to eliminate characteristic-impedance mismatches between a cable and the attached source and load is for the cable not to have any fixed characteristic-impedance value. ZERO-Tech accomplishes this by eliminating interaction between the insulation (dielectric) and the cable’s conductors—enabling uncompressed current transfer. All-important transient current is unrestricted, and RF Noise-Dissipation is linearized (consistent octave to octave).

This extremely effective patented common-mode noise-rejection technology is deployed on the ground path in almost all AQ AC power cables, in addition to in AQ BASS Bass & Midrange speaker cables. The effectiveness of GND-Tech compromises audio above 10,000Hz, preventing the dedicated Bass & Midrange cable from being ideal for Full-Range use.

Solid conductors prevent electrical strand-to-strand interaction, major sources of distortion. Surface quality is critical because a conductor can be considered as a rail-guide for both the fields within a conductor, and for the magnetic fields that extend outside the conductor. The astonishingly smooth and pure surface of all AudioQuest’s Perfect-Surface metals nearly eliminates harshness and greatly increases clarity compared to lesser materials. The careful choice of the sizes of the PSS and PSC+ conductors ensures that FireBird’s performance is close to using all PSS Silver, but at a much lower cost.

Today’s environment is saturated with radio-frequency noise that is extremely difficult to filter or reject. The frequencies of this noise from satellites, cellular towers, and Bluetooth, etc., are so extremely narrow that a conventional shield, or a series or shunt filter, is wholly inadequate. Much of the low-level signal that carries the harmonics and spatial cues that define high-resolution audio is masked by induced radio-frequency noise. AQ’s comprehensive Linearized Noise-Dissipation System combines multiple shields and a carbon-based linearized resistive network that turns most of this noise into heat. By "linearized," we mean that the system is equally effective across extremely wide bandwidth, rather than at selected frequencies only, as is more common. The remaining bad energy is effectively drained away from the sensitive amplifier circuits via directionally controlled signal and shield conductors.

All insulation is also a dielectric whose electrical properties affect the integrity of the signal. When the insulation is unbiased, dielectric-involvement (absorption and non-linear release of energy back into the signal flow) causes different amounts of time delay (phase shift) for different frequencies and energy levels, which is a significant problem for very time-sensitive multi-octave audio. AudioQuest’s multi-patented DBS creates a strong, stable electrostatic field which saturates and polarizes (organizes) the molecules of the insulation. This minimizes the nonlinear time delays, resulting in clearer sound emerging from a “blacker” background. The inclusion of an RF Trap (a technology developed for AudioQuest’s Niagara Series of power products) in the DBS battery pack further reduces radio-frequency noise. The DBS battery packs will last for many years. A test button and LED allow for the occasional battery check.

When possible, running separate cables to the treble and bass “halves” of a speaker considerably reduces distortion. Bi-Wiring keeps the large magnetic fields associated with bass energy out of the treble cable, allowing the delicate upper frequencies to travel a less magnetically disturbed path, like taking the waves out of the water when you swim. AudioQuest BASS cables’ GND-Tech (patented Ground-Noise Dissipation) attracts RF energy away from the amplifier’s output. When properly implemented, Bi-Wiring has always been a cost-effective way to get better performance for the same or less money. With GND-Tech, the advantage of Bi-Wiring is much more dramatic. FireBird BASS cable is ideal for the Bass input of a Bi-Wireable speaker in combination with a FireBird ZERO on the treble input. A BiWire-COMBO with BASS and ZERO cables joined together at the amplifier is usually the most convenient. When Tri-Wiring, use BASS cables on the Midrange and on the Bass inputs. Caution: Do not Bi-Wire with two ZERO cables. Two or more ZERO cables in-parallel can create a very high-frequency resonant peak (ringing), resulting in poor sound. On a Bi-Wired speaker, only use a ZERO in combination with a BASS cable, otherwise use a single ZERO cable with jumpers.

Mythical Creature cables are Cold-Welded to AudioQuest’s extremely pure Red Copper Spades or Bananas. The bare copper is submerged (hung) in a vat of pure silver instead of being tumbled in a lower-grade solution. AudioQuest speaker breakouts and plug casings are not metal in order not to induce RF Noise into the conductors.