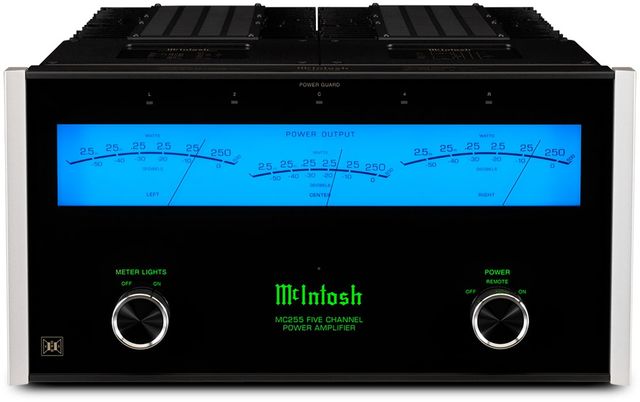 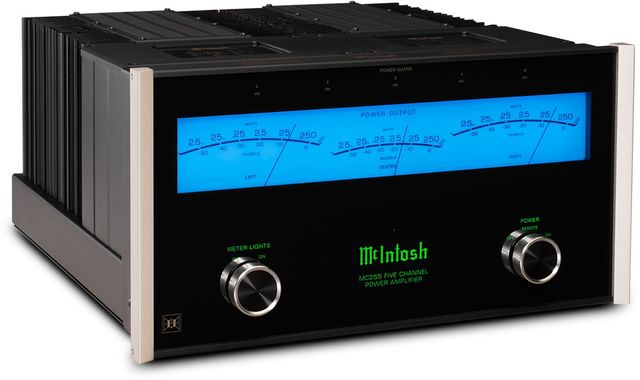 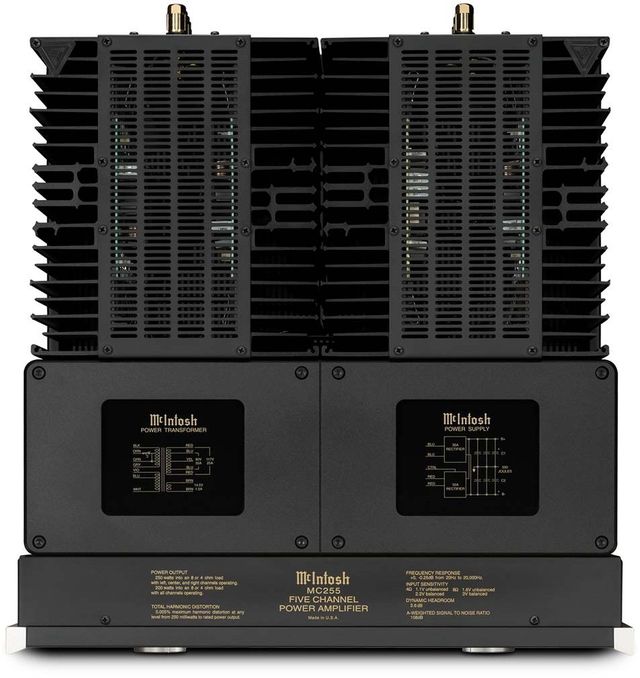 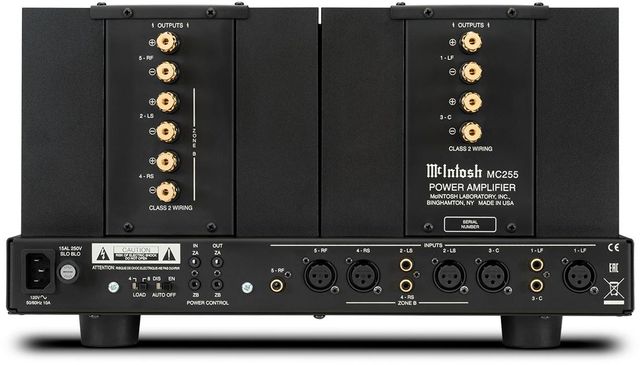 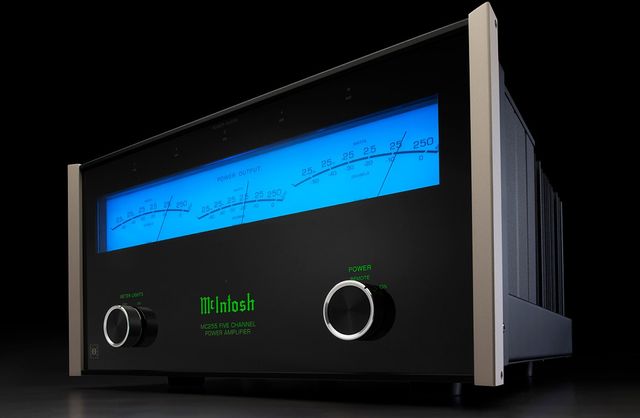 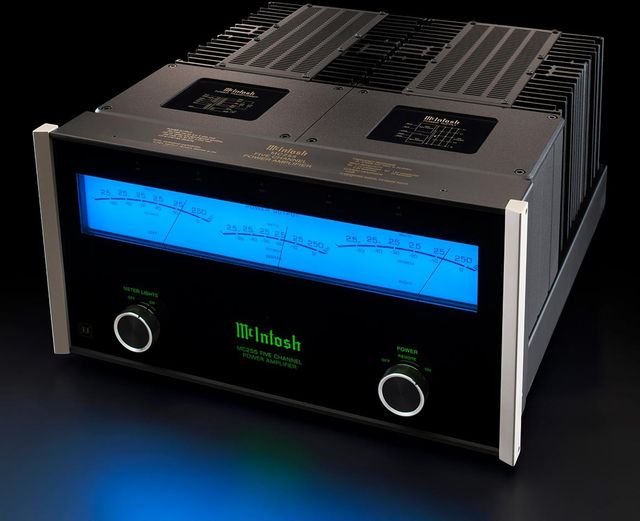 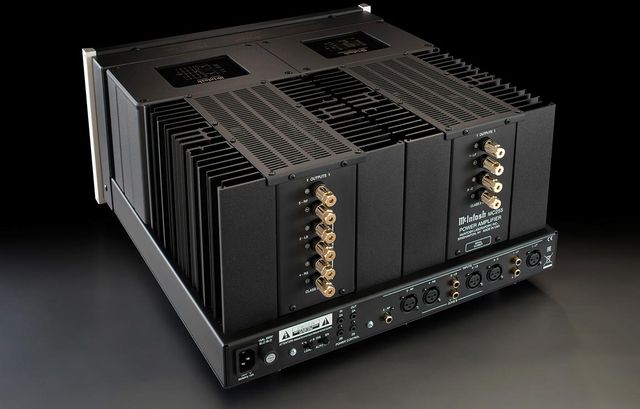 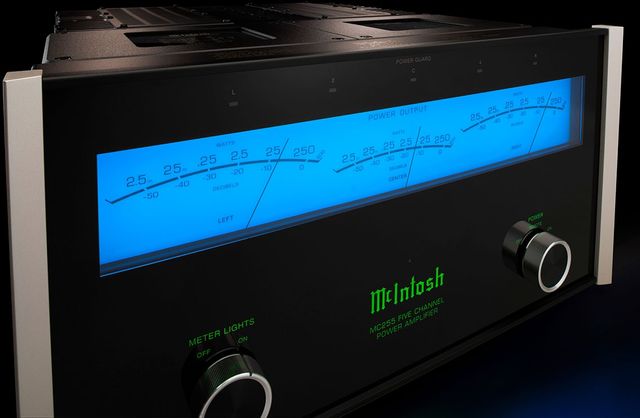 The MC255 features our striking new TripleView™ Power Output Meter that independently indicates the real time power reading of the amplifier’s three front channels. Instead of three separate meter windows each housing a single meter as found on our previous 5-channel home theater amplifier, the easy-to-read, 15” (38 cm) wide TripleView features three of our traditional mechanical meters in a single meter enclosure. While a totally new design, each of the three peak responding pointers in the TripleView meter have the same enticing motion that McIntosh meters are known for and function at the same high level as any of our meters. The enchanting look and welcoming glow of the TripleView meter is sure to draw interest from friends and family, but its trademarked blue lighting can be turned off so as not to compete with your TV or movie screen.

Besides the new TripleView meter, the MC255 has received many other performance upgrades to deliver an unforgettable cinema experience in your home theater. Filter capacity has been increased by 50% which has more than doubled dynamic headroom from 1.7dB to 3.6dB – a key feature in a home theater amplifier – as well as improving the performance of low frequencies. When using just the front left, center and right channels, power output has been increased by 25% from 200 Watts per channel (WPC) to 250 WPC. When using all 5 channels, each will receive a healthy 200 WPC. Regardless of how many channels are used, the full 200 or 250 Watts is delivered to either 4 or 8 Ohm speakers via our Dynamic Power Manager® (DPM) technology.

The MC255 runs cool and quiet thanks to four of our McIntosh Monogrammed Heatsinks™ which are connected to advanced high current output transistors that efficiently and silently cool the amplifier; as a result, noisy cooling fans that can interfere with the movie soundtrack are not needed. A quiet, specially wound toroidal isolation power transformer also helps keep noise to a minimum. Speaker terminals have been updated to our standard gold-plated binding posts that prevent corrosion and ensure a quality signal is sent to your home theater speakers. Traditional McIntosh knobs now adorn the front panel to control the meter lights and power function. Direct LED backlighting has been added to the front panel for improved color accuracy and durability. Our eco-friendly power management system that will turn the amplifier off after a set amount of time when no input signal has been detected is also now included.

While the MC255 has received many upgrades, it also comes with hallmark McIntosh technologies such as Power Guard® that prevents potential speaker damage caused by clipping and over-driving of the amplifier, and Sentry Monitor™ that protects against short-circuits by disengaging the output stage should the current ever exceed safe operating levels (it then resets automatically when operating conditions return to normal). Both balanced and unbalanced inputs are included to connect your home theater processor to the MC255 home theater amplifier.

The MC255 can be used to power a conventional 5-channel home theater; it can be paired with either our MI128 or MI254 digital amplifiers in home theaters that have additional surround sound speakers for use with object-based 3D audio formats such as Dolby® Atmos, DTS:X™ and Auro-3D®; or it can be used in a two zone configuration with the three front channels used at 250 WPC in one zone and the two surround sound channels used at 200 WPC in a second audio zone in your home.